Nearly three decades ago, at the onset of transition, ex-socialist countries’ enterprise sector was lagging severely behind that in the developed West – machines, and technology more broadly, were largely obsolete, labor productivity low and managerial techniques inadequate for a modern economy. Restructuring of enterprises i.e. installation of new technologies, improvement in quality of products, introduction of new processes, upgrade of the labor and management and exploration of new markets was crucial for the success of transition.

While early macroeconomic policies were designed to address macroeconomic disequilibria, they in combination with policies for micro-level adjustments were to conduce to enterprise restructuring. In many transition countries, foreign direct investment (FDI) was the key solution towards the task of enterprise restructuring. This was because – at the inception of transition and ensuing first years of reforms – there was a severe lack of capital, inadequate domestic technology and underdeveloped managerial talent.

This demand for FDI capital led to a huge inflow of foreign direct investment to the transition countries when literally hundreds of billions euro worth capital led to acquisition of a substantial share of domestic productive capacity in these countries. Relatedly, some numbers will demonstrate that – in a small economy of Estonia by 2017 cumulative inward FDI reached nearly 90% of its GDP (net position being 61% of GDP). Other countries became significant hosts of FDI as well – inward investment in Czechia were 72% of GDP while that in Hungary was 65% of GDP by 2017. 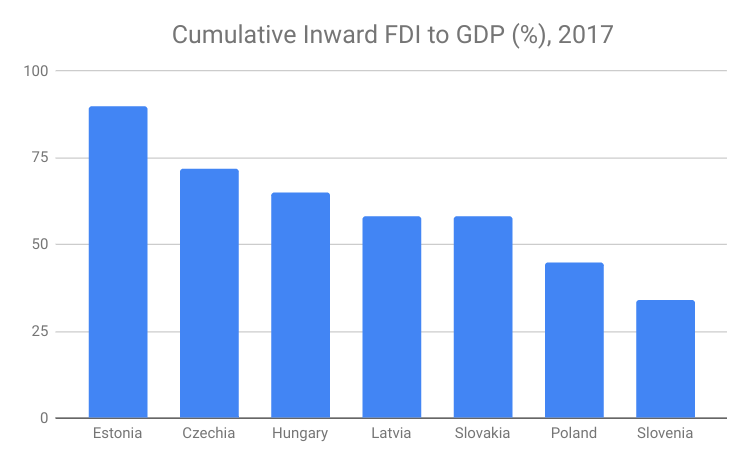 It seems fair to say that up to now the FDI has been the main driver of growth in most post-socialist countries. However, these countries have matured by now – a pool of managerial talent has grown both by quantity and quality, countries have been integrated into international sales chains, capital for sound projects is available from private equity groups or banking sectors. Domestic R&D and science have moved closer to the world’s frontier in some countries and the quality of managers and other experts is such that the technological know how can be imported easily. In other words, investment landscape in at least most advanced countries of the region has changed and is conducive to formation and growth of world competitive but domestically owned companies.

Hence, it seems that at the end of 2010’s the big “growth” question is which model of growth to promote ? To further a model based on FDI or attempt to nurture domestic enterprises ? As often-times is the case, the middle road will likely deliver the best results. FDI still brings most modern managerial know-how and corporate culture, tested processes, high quality products and connection to existing markets – all valuable attributes of a modern enterprise. It would be a mistake to discourage their inflow.

However, should generous FDI incentives be kept in many countries or these resources be rather targeted to creation of domestic startups and existing companies ? To be sure, domestic companies have certain advantages too. First, large domestic investment groups/enterprises are probably more keen to invest in public goods than foreign-owned enterprises. Things like very local infrastructure, education, culture or sports – investments that have spillovers – are much more likely to be supported by local big entrepreneurs than by branches of large multinational companies. Second, at times, domestic policymakers may want – through a moral suasion or otherwise – coordinate with a private sector and in such cases domestic entrepreneurs will more likely be brought on board to cooperate.

Last but not least, as Prof. Dani Rodrik1 tells us, FDI ownership shifts the bargaining power from labor to capital leading to lower wages on a company level (and may lead to lower labor/output ratios in the whole economy). In extreme case, detachment of labor from the companies in combination with perceived unfair wage treatment may lead to backlash against foreign ownership as such. A legitimacy of the current highly integrated economic system might be called into question as well. From this point of view, a more balanced economic structure – one in which both foreign and domestic enterprises co-thrive – seems to lead to more sustainable economic model.

Hence, given limited resources available, it might make sense to earmark some share of resources yet devoted for FDI incentives for the support domestic start-ups instead. Given that typical start-ups do not require much funding, a relatively large number of small starting entrepreneurs could be thus supported. One way to accomplish this is through a independently run fund with multi-source funding – perhaps partly private charity sponsored – from which the entrepreneurs could petition a support or via which various other schemes of support could be administered. Only a small share of funds hitherto available to huge FDI projects and redirected to small business could make a big difference to many individuals. The support of start-ups or small entrepreneurship would have an added advantage of pulling employees into entrepreneurship thus converting them into “capital-owners” with positive implications for social mobility, distribution of income and nurturing of entrepreneurial culture in these countries. Furthermore, this all could work as a potential recipe against the backlash against the current economic system which in its nascent form seems ubiquitous at many corners of the world.

1. Dani Rodrik, “Populism and the economics of Globalization”, Journal of International Business Policy, 2018