Is the advanced East as rich as the Southern Europe?

As a regular visitor and keen admirer of Andalusia of southern Spain or Crete of Greece I not only get enchanted by the marvels of the two vacation heavens. Being an economist from an ex-socialist country, I also like to keep my eyes open to gauge the contrasts and differences between my home country and the European South, cultural as well as those related to the respective economies.

A perusal of various statistics of the real economic performance of the Central Eastern European countries and the European South – here defined as Italy, Spain, Portugal, and Greece – suggests a substantial level of convergence of the former to the level of the latter. While in the early 1990’s – at the onset of transition – the CEE countries lagged substantially behind all Western European countries, now the picture is very different.

In terms of the economic output adjusted for prices (PPP) the most advanced countries of CEE such as Czechia with 89% of GDP of the whole of EU and Slovenia (85%) have overtaken Portugal (77%) and Greece (67%) while are nearing the level of Spain (92%) and Italy (96%). Does it mean that the most advanced countries of CEE are about 10-20 % points richer than Greece/Portugal and about 5-10% points poorer than Spain/Italy ? Does it mean that – with a bit of simplification – we can claim that the level of prosperity in the frontier CEE countries have reached those of the European South?

While it is useful to count on the official statistics to paint the picture of overall prosperity in these countries, any visitor to southern Europe vs CEE will make his own assessment on the basis of local incomes, prices, and visual surroundings and probably conclude that something does not quite dovetail. Why ? This article will put in a sharp contrast comparison on the basis of measures of real economic activity vs comparisons which includes the effects of price levels as well as of accumulated wealth.

The fact that CEE countries are normal, in the parlance of Prof. Shleifer1, in the sense that they are coping with issues of typical market-based middle-income economies is well established. From this view angle, the TRANSITION is over – but is the CONVERGENCE process really nearing its completion (when numerically compared to the European South) ? From the point of view of overall prosperity, are really advanced CEE countries approaching the riches of the southern EU countries?

As with many statistics in economics, here also it is instructive to note a difference between flow and stock indicators. The Gross Domestic Product – a value of all goods and services produced on the territory of a given country within a year – is clearly a flow variable. When a comparison is made on the basis of GDP adjusted for prices we compare the level of economic activity in real terms. Since what gets produced, gets distributed, this also says something about a standard of living in countries. In this sense, Czechia/Slovenia are not far from the best performing southern countries (Italy/Spain) while their GDP ( on PPP basis) is higher than that of Portugal and Greece.

While the GDP (PPP based) is a construct of economists who in cross-country comparisons adjust for differing prices, the actual GDP that is produced in economic life is nominal. On an individual level, prices one sees in shops are nominal, wage an individual receives is nominal. On a company level, sales are nominal and so are the investments, for instance. On a country level, current account balances, debt levels or investment flows – all of these indicators are also of nominal variety. In other words, the world in which individual participates, the one he can touch is nominal.

This fact that the actual economic life is “nominal” is oftentimes neglected by economists who overly work with their analytical constructs which adjust for prices, they talk “real” variables. However, for instance, when one thinks about the national economic power, the nominal GDP is much more useful concept than the real GDP ( or the one based on PPP). Investment flows that help some countries grow or outflow of which can devastate others are kept on records in nominal figures. Price signals that transmit crucial information throughout the economy, which are important for decisions of consumers, firms and other entities are also nominal. In other words, the actual world in which we live seems to be nominal.

Hence, in cross-country comparison, there is a clear need to look at GDP figures also before the adjustment is made for price differences i.e. GDP in nominal figures. Because of much less competitive production structures and ensuing foreign imbalances, many of the CEE countries had to put up with severely undervalued currencies at the inception of transition. Hence their price levels at the beginning of transition were much lower than those prevailing in the West (for instance the price level of the Czech economy in 1995 was 38% of the EU level). Even now, nearly three decades after the transition started, prices in CEE countries are much lower than in the Western or Southern parts of the EU. According to Eurostat, in 2017 the Czech price level was only 67% of the average price level in the EU while that in Slovenia was 82%. Prices in Portugal (82%) / Greece (89%) and those in Spain (91%) and Italy (99%) are above the level in CEE countries. On the basis of these statistics, it seems that convergence in real output has outpaced the convergence in prices in CEE. The result is that “the nominal world “ – which is the world a visitor from the East sees when visiting South – is “scaled up” nominally in the South compared to the CEE region.

In order to further explain this analytical point, make the following thought experiment. Let’s say in Eurozone, both a hypothetical country East and country South have the same GDP per capita on a PPP basis (and, say, same labor/output ratios and similar conditions on the labor market – this should more less imply same real wages). However, the country South price level is 30% level higher (nominal wage of worker from South is 30% higher). Would workers of both countries “feel” the same rich ? The argument could be made that visitor from East to the South is worse off than it is in the opposite case, for obvious reasons. Everything being scaled up by 1.3 factor, the South is more expensive for the visitor from the East than is his home country. Obvious implications follow.

As mentioned above, price levels everywhere in Southern Europe are higher than those at most advanced CEE countries. This contributes to one’s skepticism about the claim that “the East has nearly reached the level of wealth abundance of the South”. A comparison of GDP in nominal figures for the six countries, as in the table below, further brings this point home. For instance, Italy and Czechia are much further apart in this comparison; the latter country is behind Portugal.

Even more important than the “nominal or price effect” is the issue of differences in the accumulated wealth. In flow/stock parlance, accumulated wealth is clearly a stock indicator. According to Credit Suisse, in 2018 the average wealth per adult in Italy was 217,787 USD, Spain 191,177 USD, Portugal 109,362 USD and in Greece 108,127 USD. This is substantially more than 79,097 USD in Slovenia and 61,489 in Czechia. It seems that the advanced countries of CEE are nowhere near the wealth levels compared to the South, be that poorer countries like Portugal or Greece or richer ones like Italy and Spain. This is the second explanation for a much skepticism that the top CEE countries are near the Southern countries in the level of their prosperity. 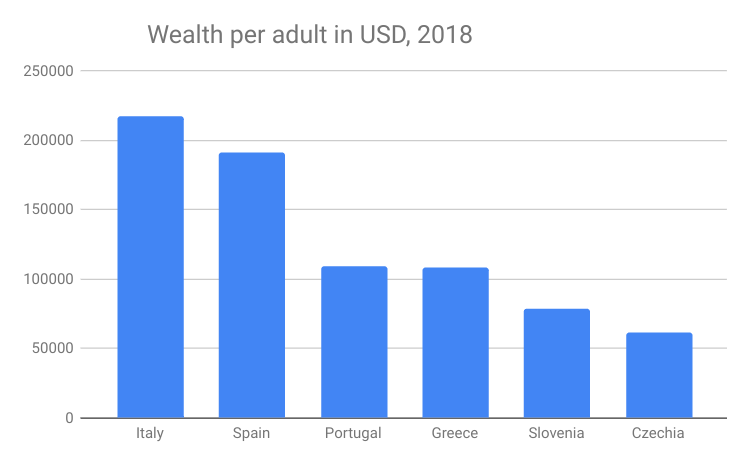 A more thorough inspection and analysis of economic statistics suggests that the level of convergence of the most advanced CEE countries in prices has not progressed as far as the convergence in real economic activity. Furthermore, differences in wealth likely due to the fact that southern countries have had market-based economic systems for longer than the CEE countries leads to a further explanation for lower perceived wealth abundance of the CEE vis-a-vis the European South.

This answers the question posed at the beginning of this narrative whether the advanced CEE countries reached the level of riches of the South to the negative. Nevertheless, the expected continued convergence in the future is likely to further reduce over time the differences between the CEE and the South, both in income and wealth.